What is palm oil? 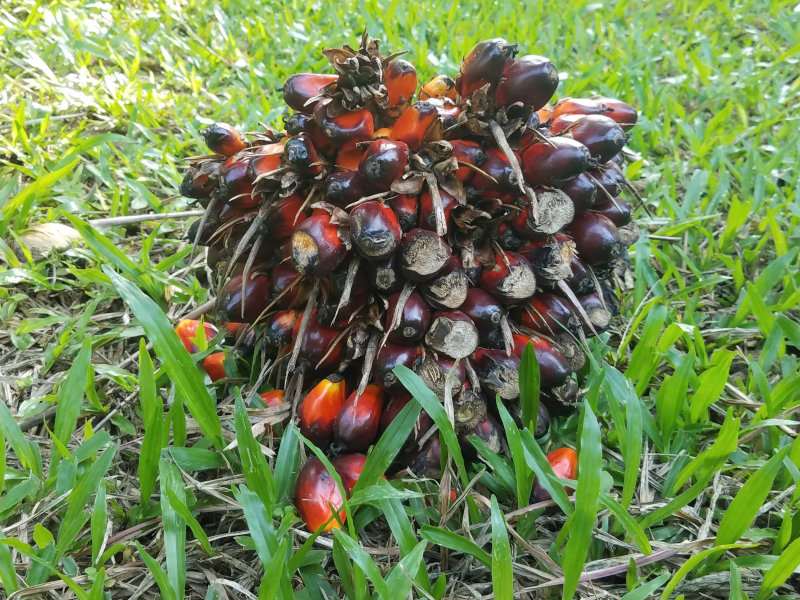 Palm oil and palm kernel oil are versatile, edible oils derived from the fruit of the oil palms, in particular the African oil palm, Elaeis Guienensis. Solid at room temperature and trans fat-free, they are increasingly popular alternatives to butter and margarine in food manufacturing. At the same time, because of its versatility and cost-effectiveness, palm oil has become increasingly integral in the production of cosmetics and household products.

Due to its high yield and low production costs, palm oil is a highly profitable crop. Worldwide the palm oil industry brings in over 40 billion dollars each year. This has led to a massive increase in production in Indonesia, which now supplies more than 50% of the world's palm oil.

Palm oil and the orangutan

The explosive growth in palm oil production in Indonesia, which has expanded 200-fold in the last 50 years, has come at the cost of massive deforestation. Combined with illegal logging activity, almost 40% of the Indonesian rainforest has been lost since 1950.

For the orangutan, these changes have been disastrous, with more than 80% of their native habitat being lost in the last 20 years, driving them towards extinction. The Sumatran orangutan is now listed as critically endangered, with fewer than 7000 individuals in the wild, while the Bornean orangutan population has plummitted more than 50% in the last 60 years.

Gentle and highly intelligent, the orangutan is one of our closest relatives, sharing 97% of our genetic makeup. But now they face a very real existential threat from the palm oil used in everyday consumer products.

Rainforests and peatlands are critical "carbon sinks", which are essential for controlling the global carbon dioxide (CO2) levels. CO2 is one of the most important greenhouse gases, which have been implicated in global climate change. The burning of Indonesian forest and peatland, in part to make way for palm oil plantations is estimated to contribute as much as 4% of the entire world's greenhouse gas emissions per year.

In 2015, uncontrolled wildfires spread through the Indonesian rainforest, resulting in a massive haze that blanketed 8 countries, and generated more than 600 million tonnes of greenhouse gases. This was caused, in part, by illegal "slash-and-burn" deforestation related to the palm oil industry.

Palm oil in the supermarket

Much of the global demand for palm oil lies in its burgeoning ubiquity in consumer products. These days, palm oil is found in everything from from cookies, low-fat milk, and processed meals, to toothpaste, deodorant, and detergents. In our own database, a quarter of all the listed products either contain a palm oil derivative, or an ingredient that is typically made from palm oil.

Faced with the very real environmental impact of palm oil production, there have been some industry-wide initiatives to try to ensure more sustainability. In particular, the Roundtable on Sustainable Palm Oil (RSPO) is an association of stakeholders in the palm oil industry, including multinational corporations, palm oil producers, and non-governmental organizations (NGOs), that was established to develop and implement global standards for "sustainable palm oil". At present, the RSPO is the most widely recognized certification scheme for sustainable palm oil. Nevertheless, a number of environmental groups have criticized RSPO certification as insufficiently policed and not going far enough to ensure sustainability.

Some environmental groups have undertaken independent investigations of how sustainable the palm oil used by different companies is. For example Greenpeace, the World Wildlife Fund and the Union of Concerned Scientists have all produced reports grading companies on their commitment to using sustainable palm oil, including going beyond RSPO certification, in their products.

Following on from these reports, PalmSmart allows you to see instantly the level of commitment to sustainability for the manufacturer of each product. Arguably no grading scheme is a guarantee that all the palm oil used by any company is fully sustainable. However, it is not always practical to avoid all products containing palm oil, and so we believe this score is valuable to help you make better consumer choices.

This site uses cookies to help provide you a better experience, and to help us analyze how our site is performing. You can read our Cookie Policy and set your preferences here. By continuing to use our site, you consent to the use of cookies in line with our Policy.